A quick 'Up and Down' Djouce


This was my second visit to the summit of Djouce and easily my shortest stay ever on top of a mountain.

With the hill-running bug taking hold, I decided to give the Irish Mountain Running Association's (IMRA) Leinster League a shot. This is a series of hill-races over the summer and Djouce was to be my fourth race in the league and the toughest challenge to date.

As always, the organisation of the race was excellent. A field opposite the race-start doubled up as a temporary car-park and registration area. Registration was quick and efficient and not long after signing up, we made our way over to the starting point at Glasnamullen woods and soon the race director casually announced that the race had begun.

The first couple of kilometres were to lull me into a false sense of security as we ran along a trail up a gradual incline surrounded by trees. This section served to stretch the runners out a bit and I settled into my usual slot somewhere in  the middle of the field. 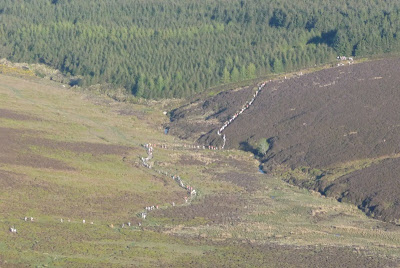 Runners on the lower slopes of Djouce (Courtesy Angus Tyner)


With summer having finally arrived, I was thankful to be running in the cool shade of the trees. Leaving the woods and emerging onto the open mountainside, the going begun to get tougher as the incline steepened and the ground underfoot became uneven. The pace quickly dropped and most of us settled into a routine of walking the steeper sections and running the rest. With calf-muscles burning, I was delighted to turn a corner onto the Wicklow Way which contours along the upper slopes of Djouce providing some easier ground on which to run as well as amazing views across to the Great Sugarloaf Mountain.

However, it wasn't long until we had to leave the Wicklow Way and tackle the last steep section before the summit of Djouce. After what seemed like an eternity, the cairn finally came into view followed by the summit marshall standing alongside the Trig Point marking the top of Djouce. The marshall advised us all to lift our heads and take in the views but I could only muster a quick glance up and my brain was in no fit state to attempt to make sense of what looked to be a stunning vista.

I had convinced myself on the ascent that once I got to the top, all the hard work was done and the downhill section would look after itself. I really couldn't have been further from the truth.. The descent was ridiculously fast and I soon found myself careering over some very uneven and rocky ground. Each step on the hard ground pounded my tired legs further into submission and I hadn't factored in the high level of concentration required to quickly pick each footstep on this kind of terrain. 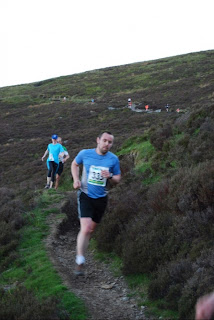 On the Descent (Courtesy Mick Hanney)


On a couple of occasions I stubbed my toe off a rock, a sure sign that my concentration was waning as my body tired. The third such time was to prove unlucky as I tripped over a rock I hadn't seen and was sent flying headlong off the trail. Luckily for me, I landed in a soft bed of heather and was quickly back on my feet albeit with some of the wind knocked out of my sails.

The last couple of kilometres coming off the mountainside and down through the woods were to prove very tough and I was pretty much a busted flush by the time I crossed the finish line. However, all the thoughts I had on the way up, all the times I told myself I'd not be doing this again, my resolution that next week I'd stay home and have a few beers instead.. all of that was forgotten within a few seconds of crossing the finishing line.

The pain and tiredness quickly vanished and what was left were memories of a hugely enjoyable 55 minutes on the mountain where there was nothing else on my mind other than the next step I was going to take and the pure feeling of exhilaration from the crazy descent. This escape from the stress and worries of everyday life combined with the amazing feeling of freedom is pretty much the essence of hill-running for me.